Changes in Curacao’s fish population over the 20th Century is a recently published study that looked to compare Curaçao’s historical records of fish catches between the years 1905 and 2016. This study highlights shifts in both catch size and species composition. Understanding changes in fish populations will help researchers better understand the overall health of the ecosystem and help guide conservation efforts for the future.

The Changes Over the 20th Century

The Caribbean Sea of today looks much different than it did 100 years ago. Early European explorers often noted the abundance of sea life, such as manatees, large sharks and sea turtles, within these waters (Cook, 1784).

On the island of Curaçao, fishing has been an important part of the islands culture since as early as 2500 B.C. (Van Buurt, 2009). Starting around 1824, Dutch colonists begun using these waters for commercial fishing, marking the first-time fishing was used to generate income (Teenstra, 1837).

The first scientific overview of the Curaçao fishing industry was first completed by Boeke in 1905 and then again in 1908 by Breeman (Boeke, 1907; Zaneveld, 1962).

These studies were then repeated in 1955, and already fishermen were noticing a dramatic shift in the availability of certain fish. Common species such as Nassau groupers, king mackerels and blue marlins had become increasingly rarer (Zaneveld, 1962).

Decades of human expansion, over fishing and decreasing water quality have led to a continuation of this shift within near shore environments, as large predatory fish become increasingly rarer or all together absent (McClenachan et al., 2010).

The Study of Fish Population

A 2019 collaborative study between CARMABI, University of Amsterdam, Department of Agriculture and Fisheries, Ministry of Health, Environment and Nature, Wageningen Marine Research, and independent researchers worked to compare changes in fish catches by commercial fishermen over the course of the 20th century. Four different areas were compared: fish caught by line, trap, and spear gun along with fish not targeted by fishermen.

Overall Trends of the Fish Population

In general, the last century saw a shift from near shore reef focused fishing to more deep-water pelagic fishing. The change in technology and practices led to a change in targeted fish species. Although direct comparisons over time can be difficult due to the wide variety of changes, on average, the CFM remained the same between 1905 and 2016, however, species composition and individual catch sizes did vary.

Complete Disappearance of Some Species

It is also important to note, that although CFM remained roughly the same, this is only a measure per individual, overall, the estimated annual catch declined from nearly 2000 metric tons to 1000 metric tons over the century. This study also highlighted some alarming trends, such as the complete disappearance of some species, and the dramatic decrease in population levels of others.

Using total catch size based on weight can be a dangerous method for analyzing the health of the local fish stock, as a shift between populations can mask the results of over fishing of specific species. In fact, given the technological advancements over the past 50 years, one would expect an increase in total fish catch, however, this has not been the case. This hints that the total disappearance of large predatory fish by the mid-19th century already had major consequences for the entire reef ecosystem.

It is also important to note that certain species, not targeted by fishermen, also saw a notable decrease in populations over the last half century. This is particularly true for fish that depend on coral, indicating the important connection between the decline in coral populations around the island to the overall health of the ecosystem (Waitt Institute, 2017; De Bakker et al., 2016).

Other forms of habitat degradation, such as loss of seagrass and mangroves, further contributes to the overall loss of fish diversity and population around the island, as these are important nursery and feeding grounds for many species of fish (Debrot et al., 2008).

This study highlights the complexities involved in studying entire ecosystems, and demonstrates the importance of monitoring and conservation efforts at all levels.

Comparing historical values of fish catches, although insightful, is not enough to fully understand the changes taking place within the near shore environments.

Understanding the complex relationships between fish species and their environments is necessary for creating a more comprehensive conservation plan in the future.

Videos and pictures, produced and edited for Dive Curaçao by Nature Pics Films. 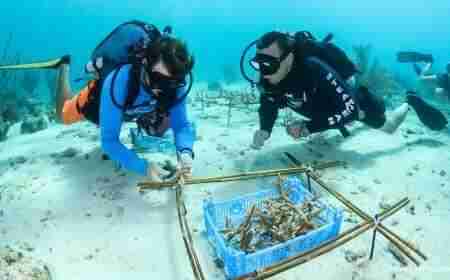