The MV Superior Producer started its life as the MV Andromeda (IMO nr. 5345431). It was built in 1957 as coastal cargo ship by Handel- & Scheepsbouw Maatschappij Kramer and Booy N.V., from Kootstertille, Netherlands. Measuring 50.22m (165ft) in length and 7.79m (25½ft) in width with a total maximum draught of 2.58m (8½ft), this 400-ton freighter was delivered on November 8th, 1957 to Muller and Reitsma N.V., from Rotterdam, Netherlands. On February 22, 1962, she was sold to Rederij L. Remeeus N.V., from Rotterdam, Netherlands and this is where she officially became known as the MV Superior Producer.

It lived a rather mundane existence of picking up and dropping off cargo all along the Dutch coastline while changing several owners over time from the original delivery date up until November 13, 1970. At this point, the MV Superior Producer was sold to Pan-Ven Line SA and re-flagged to her new home port in Panama with the sole task of moving cargo in-between Willemstad (Curaçao) and Pampatar (Venezeula), a city on Isla Margarita.

On September 30th, 1977, the Superior Producer arrived early in the morning and docked on the inside of the Curaçao Harbor (St. Annabaai) just past Queen Emma floating bridge. It was loaded with a Christmas cargo consisting of whiskey, bottles of perfume, clothing and bags for two local Curaçao Merchants looking to profit from the upcoming holiday season.

At 13:30, on this unknowingly fateful Thursday afternoon, the crew of nine men in total of Venezuelan and Colombian nationality cast off the lines. Immediately the ship started to heel dangerously. The Captain ordered a portion of the cargo not properly stowed away to be put overboard. This did not help. It was further complicated because the crew neglected to close the port holes, therefore the ship started taking on water. Even the efforts of the Curaçao Port Authority tugboat to pull the boat right again had no effect.

After several unsuccessful attempts, the Harbormaster, fearing for safety of the Crew and ultimately for the Harbor itself, decided to cease all rescue efforts. The tugboat dragged the MV Superior Producer about 500 meters (1,640ft) west outside the harbor entrance. At 16:30, three hours after cast-off, the MV Superior Producer disappeared below the waves and into the turquoise depths about 150 meters (500ft) from shore. During this same period, the Captain and Crew safely abandoned the ship and they were picked up by a boat from the Harbor Police.

The Sinking of the Superior Producer

Word spread across Curaçao of the sinking, like a wildfire! Scuba divers, free-divers and snorkelers alike arrived on the shoreline from all over the island to scavenge the wreck for all its cargo – it was described as “pure chaos” at the time and within a few days, there was nothing left! Even the neglected port holes were gone.

Today, she sits quietly upright on her keel with her bow facing west in roughly 30m (100ft) of water and about 150m (500ft) from the shoreline just west of the Curaçao Mega-pier. As an advanced shore or boat dive, the easiest approach is from the stern due to the possibility of the prevailing currents.

As you descend the fringing reef, an eerie dark shadow starts to appear. At first, you only see the stern, but then the entirety of this magnificent 50m (165ft) mass with it superstructure rising to within 21m (72ft) of the surface reveals itself, covered in a vast kaleidoscope of color.

Now with roughly 30 years of growth, the MV Superior Producer is an amazing artificial reef site home to numerous colonies and different species of corals, sponges, gorgonians and sea whips. Because of this, it is a natural attraction for schools of predatory fish such as Tarpons, Barracudas, Snappers and Jacks.

This is also a heaven for macro photographers and anyone who likes to get a close look at smaller stuff too. Caribbean spiny lobsters, parrotfish, French and Queen angelfish, turtles, scorpionfish and even morays. Look even closer for banded coral shrimp, nudibranchs, flamingo-tongue shells and possibly even frogfish. Basket stars, octopus and large spider crabs catch the eye while night diving this beautiful shipwreck too.

With its wide-open cargo holds and accessible wheel house, the MV Superior Producer has become renowned as one of the Top Shipwrecks in the World rivaled only by the likes of the SS Thistlegorm in the Red Sea and the WWII wrecks in Palau but sadly a new chapter is scheduled to start. A new Mega-pier, larger than the existing one will be constructed virtually on top of this glorious shipwreck sometime soon.

Oddly enough, a little-known fact is that in 2001 a new Mega-pier was also scheduled to be built, but Curaçao authorities at that time changed their mind to protect this priceless artificial reef… maybe an intervention can still happen.

Who knows, but in the meantime, don’t wait… DIVE CURACAO!

Photography and Videography courtesy of our partners: Naturepicsfilms and, Turtle and Ray Productions HD

In fact, in the spring of 2017 before the site closure, the Superior Producer was voted as one of the Top 5 Best Caribbean Dive Sites by USA Today! On Thursday April 26th, 2018, the Curaçao Port Authority (CPA) announced in a press release that “Diving is Once Again Allowed At Superior Producer”. This announcement signaled an end to a year long prohibition due to the construction of the new “Tula” mega pier.

Special thanks to Robby Myers from Scuba Diving Magazine for re-printing this story of Curacao’s iconic shipwreck on June 14, 2018.

The development of a new megapier on Curaçao threatens one of the Caribbean’s most popular wrecks. Regularly voted as one of the best wreck dives in the Caribbean – and among the best in the world – the wreck of the Superior Producer is under threat from the development of a new cruise ship ‘megapier’.Curaçao, with its colourful and vibrant capital of Willemstad, is a popular destination for Caribbean cruises – however, the existing pier is too small to accommodate the largest class of modern cruise ships, some of which are over 300m in length. As a result, the local government has pressed ahead with the construction of a second pier, despite objections from the island’s dive community and conservation groups. The location of the pier means that cruise ships will be moored almost directly on top of the Superior Producer, potentially causing untold damage to one of the Caribbean’s best loved wrecks and, indeed, rendering it completely inaccessible to divers.

Read the full article by By Mark ‘Crowley’ Russell 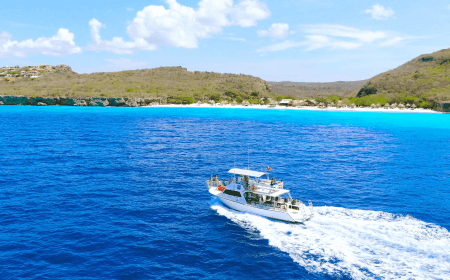