Economic recovery in the Caribbean islands is impossible without nature conservation 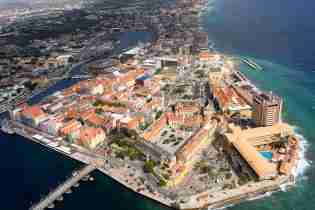 Tarpon City is located outside of the imposing walls of Waterfort, an old Dutch fort located on the outskirts of the historic Punda district of Willemstad, the capital of the island of Curacao. This dive site hugs the coastline along the outer walls of the fort, right at the water’s edge for about 415 m (1,360 feet).

The original walls of the fort were erected in 1634, back when Admiral Johan Walbeek began construction of Fort Amsterdam.  Waterfort was built as a defensive structure to protect the coast and Fort Amsterdam from seaborne attacks.

Today it houses, besides a diving school, a number of restaurants and terraces overlooking the sea.  Tarpon City is easily accessible from the shore.  Leave from the concrete parking lot where there is a small jetty beside the dive school and head in westward direction. There are two marker buoys (posts) for the big ships entering St. Anna Bay. Do not go past the second post as the current will take you into the bay, which can be dangerous when a ship is entering too. Between the two posts is where the tarpons are hanging about. These massive silver fish, will come up really close to you when not chased.

While in the area, we highly recommend that you visit the MV Superior Producer.  Not only is it a dive into history but it has become one of Curaçao’s most popular dive sites and one of the Caribbean’s top shipwrecks.

The original walls of the Waterfort were replaced in 1827 by an imposing elongated structure with 136 turrets and vaults containing stores, stables, and medical services. Together with Rif Fort, known today as the Renaissance Mall and Riff Fort – a nearby twin fort right across the narrow waterway of Sint Annabaai that separates Punda and Ortrabanda, they became the capital’s first line of defense against naval attacks.

During WWII, the fort was once again made operational when Dutch soldiers became housed inside the fort and 37mm anti-aircraft artillery machine guns were mounted on its outer walls.

Unfortunately, little of the original fort was kept intact shortly after WWII — save its the outer walls. Today, an abandoned hotel now stands right upon where the center of the fort used to be situated, while its outer walls now house a variety of commercial restaurants and terraces overlooking the Caribbean Sea.

Fort Amsterdam was constructed in 1634 by the Dutch West India Company (DWIC) and served not only as a military fort but also as the headquarters of the DWIC. Currently it serves as the seat of the government and governor of Curaçao. The fort is named after the Amsterdam chamber of the DWIC and was considered the main of eight forts on the island.

The famous area of Punda, with its unique colorful buildings along the “Handelskade” waterfront, is a must-see for the thousands of tourists that visit Curaçao each year. But can you imagine that a few hundred years ago, that famous site was nothing more than dry land, inhabited only by cacti and thorny shrubs?

The island of Curaçao was first conquered by the Spaniards in 1499 and remained in their possession until the Dutch West-Indian Company overtook the island in 1634, under the patronage of the Dutch. Until this point, there was no major development or construction in the area now known as Punda. However, being seasoned tradesmen and mariners of the famous Dutch West-Indian Company, they saw the potential to create a port for naval defense and trade in the naturally sheltered deep-water harbor called “Schottegat”. In 1635, the company’s leading Admiral, Johannes van Walbeeck, started building Fort Amsterdam at the mouth of the harbor, at the “Annabaai” (Sint Anna Bay), as the first defense point against other European colonizers surrounding the Caribbean Sea.

The headland on the eastern side of the bay was given priority in the building process, and it took only one year to be completed. This area used to go by the name of “De Punt” (The Point), but later it became “Punta” and lastly, “Punda”. Closer to the end of the 17th century, a city wall was built around Punda as a second line of defense.

Curacao: a Macro Paradise for Underwater…