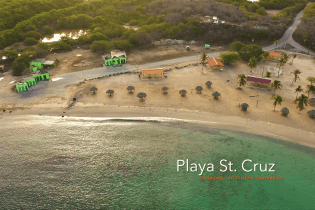 Located near the center of the island of Curacao, near Barber, Boca Santa Cruz is on the North West coast of the island, You might want to drop by even if you aren’t staying nearby. The beach is set in a rather urbanized area, but it would be incorrect to assume that the beach itself will be found overflowing with visitors. Instead, you will usually find quite a number of places to throw down your towel.

With a few huts set back from the water, restroom facilities, and a beach bar/restaurant, Boca Santa Cruz is a great spot to escape the crowds while still still being able to take advantage of nearby amenities. There’s also the opportunity to be taken off shore to one of a number of private, secluded beaches by the water taxi that leaves from here.

The beach is on the northwestern part of the island. You can get here in the car by taking Weg Naar Westpunt west from Willemstad, then taking a left towards Fontein. Continue on this road until you read Kaminda Statius van Eps, where you’ll make a left towards the coast. The road winds around, but eventually takes you right to the shore.

Diving and Snorkeling in the Santa Cruz area

Several premium Curaçao diving and snorkeling sites are accessible by boat from the Santa Cruz area such as the world renowned Mushroom Forest, the famous Blue Room and of course Black Sand Beach, also known as Santu Pretu.

However, there is one site that does not appear in any of the Curacao Diving Guides – until now!  This site we call Santa Cruz because it is located about 5 minutes west of the Boca (east of Playa Lagun) by boat. Here, you will find a mooring on the sandy plateau just a few meters inside of the beautiful drop off.

This site is special and rarely ever dived on plus it is a perfect spot for a snorkeling adventure. Along the rugged coral cliffs where you will find an abundance of juvenile reef fish not to mention colorful soft coral colonies.

For divers, once you descend on to the fringing reef, you will find this site teaming with life and color.  Also, it is not uncommon to see massive pods of Spinner Dolphins playing in the area (depending on the time of year, of course) because they inherently use Santa Cruz as a birthing and training ground for their young.

The beach is encircled by mangrove swamps which can fog the water, so snorkeling isn’t as good here as you’ll find elsewhere on the island. However, with soft sand and palm trees for shade, this beach provides a very relaxing experience. Bird-watchers will find this beach of particular interest, as the mangroves attract a wide variety of native birds.

Hidden away, Boca Santa Cruz as well as its offering of amenities are a safe choice among tourists wishing to find a place away from the crowded shores, since it is located inside a peaceful area.

This means that there’s little need to consider the time you come, as there is a pretty small chance you be forced to get around possible other tourists who will be needing access to the conveniences that are available.

Unfortunately, public restrooms aren’t available, which is something to consider if you plan to spend a full day in the sun. Fortunately, beach umbrellas will be available for guests hoping for a place to relax in the shade.

You may find that Boca Santa Cruz is a great fit for your vacation, but maybe you want to see more; if so, Curaçao offers a variety of beaches for travelers who wish to try elsewhere.

You’ll find this beach on the North West coast of Curacao. It’s located near Landhuis Ascension, which is a short cab ride’s distance, and it is among the area’s attractions.

Historical attractions like Landhuis Kenepa Plantation provide a nice compliment to the scenery of Boca Santa Cruz, and allow visitors to learn more about Curaçao. Actually, this coast is easily reached by taking a cab from this destination of historical interest.

There are options for close-by activities so you won’t run out of things to do. The attractions nearest to this beach are listed in the following table.

Another location you might enjoy is Playa Shon Moso, which is generally a pretty popular beach. It is located two and a half miles to the southeast. However, if you’re looking to enjoy a quieter scene, Playa Lagun is an area which doesn’t host as many visitors. It is located a quick car or cab ride away.

Another sun-drenched spot to consider is Cas Abao, located approximately three miles to the south east. 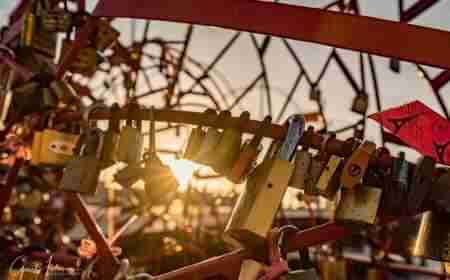 Unlocking the Best Travel Reasons to Visit Curacao in 2021