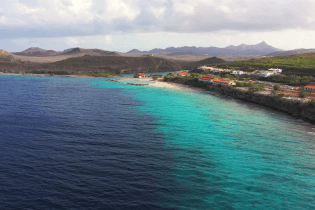 There are several dive sites you can reach from Playa Santa Martha by shore such as Mako’s Mountain, The Airplane Wreck and Mike’s Place.

Santa Martha Bay is such a beautiful spot on Curacao, it has a great view, and shows the island in a different way. It is quiet, because this place is not visited by tourists that much. The bay is near the village of Soto.

And a visit to the plantation house Landhuis Groot Santa Martha is one of the few houses built in a U-shape, it’s definitely worth to visit it. The plantation house now serves as a care facility for people with physical and/or mental disabilities and their products they make are sold in the shop.

Finally, director Will Vogels of the Lions Dive Beach Resort expressed his appreciation for the drive with which the government and the relevant ministries have responded to the requests for the necessary permits and regulations starting from June this year. This allows the developers to start a project on Bándabou that will be second to none in the shortest possible timeframe.