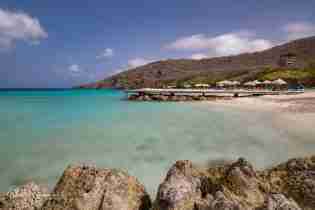 Located inside the historic Plantation PortoMari is one of Curacao’s more beautiful fully equipped beaches – including a full service dive shop.  The Valley at Playa Porto Mari (also called Porto Marie) is not only unique and diverse, it is also one of the top 10 sites on Curacao.

The “valley” between the two healthy parallel reefs is just a short swim out from shore where you will find a wide variety of healthy marine life on the fringing reef. This unique double reef system is accessible directly from the beautiful sandy beach where you can cruise through the large schools of blue tangs and curious trunkfish who are exploring the man-made habitat balls in the shallows.

Traveler Tip: “Playa PortoMari is one of the many secluded natural bays of Williwood surrounded by untouched nature. The lovely white sandy bay with shallow and calm water has a unique Caribbean atmosphere. It is conveniently facilitated with a lounge chair rental, beachbar/restaurant, restrooms, parasols and you can even book a massage. Showers, changing rooms and lockers are provided; all to make sure you will have no worries at all (at least for a day).” Click here to find out more.

​You will often see fish here that are rarely spotted at other dive sites – such as pairs of cornet fish, nurse sharks and large schools of creole wrasses. Keep your eyes open for spotted eagle rays on the sandy valley floor and at the top of the reefs. ​A mooring buoy has been placed in the center of the bay for boat dives; this is a good reference point to begin shore dives from. Minimal current or wave action is present; visibility is usually very good, over 30m (100 ft). At the buoy the depth is about 9m (30 ft) sloping to the first nearby reef, which is at 15m (50 ft). Swimming straight out will take you over the first reef, then to a sandy bottom, and finally to the second reef which starts at about 18m (60 ft).

Additional nearby locations you might enjoy include Cas Abao, Daaibooi and Rif Sint Marie.

History of The Plantation

The Plantation PortoMari, which covers an area of 594 hectares, has a history that can be traced back to 1684 when the government first gave permission to raise livestock there. The landhouse (or country house) was built in the second half of the 18th century, but in the 1930’s it was struck by lightning and burnt to the ground.

From the very beginning of Dutch rule in Curacao, the sheltered bay at Playa Porto Mari was considered to be of strategic military importance for the defense of the island. In the 18th century a fortification was built on the top of Seru Caballe, a hill on the east side of bay.

Rebuilt in 1742 as Fort PortoMari, it was equipped with 10 cannons, both 12 and 18 pounders. During the British invasion of Curacao in 1805, the fort was by no means up to strength.

The English captured the fort, threw the only remaining cannon in the sea, plundered the power-house and devastated the battery. Thus the curtain fell for Fort PortoMari.

PortoMari played an important role in the slave uprising of 1795. It was here that slaves gathered and the famous discussion took place between Tula and Pastor Schink.

About 200 slaves and freed slaves used to live and work on the plantation. They raised livestock, cultivated maize, grew fruit and vegetables in the orchard near the landhouse, made charcoal and tended the limestone ovens. After emancipation in 1863, most of the slaves continued to live on the plantation.