A Virtual Road Trip to the Westside of Curacao

Exploring Curacao can be a pretty ambitious task.  That is why we want to take you on a virtual road trip to explore the west side of Curacao. Because one day, hopefully soon, you will re-emerge back into the sunlight. To walk across the sand, to dip your toes into the incredible turquoise waters of the Caribbean Sea and to explore Curacao for yourself.

So hop aboard and let us take you away on a virtual road trip to dream of Curacao.  On this journey, we will be diving in to explore the heart of the Dutch Caribbean to uncover the hidden gems.

If you are interested in amazing beaches, an incredible history, a beautiful culture, delicious food and a kaleidoscope of beautiful life then keep reading!

Are you ready to dive in? Let’s go!

Quick Travel Tip: For those of you that like to explore on your own rather than with an organized tour, make sure that you reserve a rental car up front. Bring water, comfortable shoes and flip flops, environmentally friendly sunscreen, a snack, and of course your swimsuit, mask, snorkel and fins. If you have sensitive feet, you might want to bring water shoes as well.

Exploring the National Parks in Curacao

The three bokas (translated: mouths) that are protected sea turtle nesting grounds include the sea cave at Boka Tabla, Boka Pistol with its crashing powerful waves, and Boka Wandomi with its very impressive landscape. Also, take the time while there to see the impressive natural bridge and do not forget to carry water with you as you explore the area as there is little shelter from the sun.

If you are in the mood for a little side adventure, then you should consider discovering Boka Patrick!

Located between the town of Barber and the eastern coast of Curaçao lies a swath of land known as Patrick, named after a plantation house which used to sit roughly in its center. Rugged, isolated and mostly flat, this is a popular area for ATV tours, but you can also hike and easily reach the coast where there are a couple of impressive inlets.  Now, take a hike around Patrick with Curaçao for 91 Days!

Travel Tip: for lunch or dinner, consider visiting Sol Food and Sunshine Getaway. Here, Sunshine and her staff will welcome you with open arms and serve you a great a meal! The menu includes lionfish, burgers, steaks, and arguably the best pizza you can find on Curacao! They’re only open Friday to Sunday and it is recommended that you make a reservation.

Exploring the Beaches of Western Curacao

Playa Kalki – This small cove with a beautiful coral beach is located in Westpunt.  You will find GO WEST Diving onsite for all your snorkeling and shore diving needs along with a very nice Beach Bar, managed by the Kura Hulanda Lodge and Beach Club.

When you descend down the flight of steep stone steps, from the parking area, you will immediately understand why this hidden treasure is rated as the number one shore diving site in Curaçao!

Kenepa Plantation (Playa Grote Knip and Playa Klein Knip Beaches) – Follow the road through the fishing village of Westpunt until you see signs for Playa Kenepa which are free public beaches. The overlook is breathtaking, and the water is calm and clear.

If you are adventurous, there are a couple of spots to jump off the stone cliffs. Just be careful! The best snorkeling is at the wall on the left side. There’s also the Landhuis of the Kenepa Plantation to visit where you will hear; “Echoes of the past that resonate loud and clear, where aspirations of freedom were once reduced to hushed tones and secret drum beats…” wrote Susan Campbell, Freelance Travel Writer.

Playa Lagun – If you continue heading south-east past Kenepa, you pass Playa Jeremi and find the small village of Lagun. The beach, located next to Bahia Apartments and Diving, is another great shore dive or a leisurely place to snorkel.  If you are there between 4:00 and 5:00 PM there is a great chance that you see and swim with the local turtles.

With its clear turquoise water, waving palm trees and white sandy beach, Cas Abao is a true paradise. Located at the northwest coast of Curaçao, the beach is and ideal spot for shore diving, snorkeling, and swimming because of the spectacular shallows leading to the healthy fringing reef.

Playa Porto Mari is located inside the historic Plantation PortoMari.  This is one of Curacao’s most beautiful fully equipped beaches that includes a full service dive shop.  The Valley at Playa Porto Mari (also called Porto Marie) is not only unique and diverse, it is also one of the top 10 sites on Curacao.

Travelers Tip: When heading back towards the island’s center of Willemstad watch for signs to Jan Kok or St. Willibrordus. Here you will find the oldest plantation house on Curacao (home of the Nena Sanchez Gallery) that overlooks the old salt plantation where, most of the time, there are flocks of Flamingos feeding in the salt ponds. While there, we recommend that you stop at the Toko Willwood for a refreshing beverage and their famous “williburger”!

Exploring the BEST Diving Sites on the West Side

The island nation of Curaçao is home to some of the Caribbean’s best dive sites and thriving coral reefs that represent a window into the past when Caribbean reefs were healthy and vibrant everywhere. Though this little Dutch Caribbean island is best known for its colourful colonial waterfront in Willemstad, too few know about the rainbow of vibrant coral and marine life under its waters.

There is another side to Curaçao, the West side known to locals as “Banda Abou”.  This is a bucolic haven for boat and shore diving, offering near perfect conditions year-round because of the natural shielding from the easterly trade winds offered by the mountain range running through the middle of the Christoffel National Park.

The western side of Curaçao stretches from Bullenbaai, near St. Willibrordus to the north west fishing village of Westpunt. Along this rugged and ancient coastline, you will discover some of the best beaches in the Caribbean such as Cas Abao and the famous Kenepa Plantation.

These world class locations, among others, provide you with an exceptional opportunity for incredible shore diving and snorkeling. However, this is just to get your feet wet because to truly “sea” the BEST of the WEST, then you need to dive into these essential dive experiences to feel it for yourself!

Dive in and start exploring the Top 5 Dive Sites of western Curaçao today!

Why? From the south eastern tip known as “Oostpunt” to the northwestern tip known as “Westpunt”, the underwater world is completely different and unique. Eastern Curacao is known to locals as “Banda Ariba”. This area is truly an unspoiled and largely still unexplored sanctuary inside of Curacao’s only National Marine Park. This preserve has amazing sheer walls covered with extensive healthy coral and sponge colonies while the shallow plateaus are overrun by magnificent examples of Elkhorn, Staghorn and Pillar coral communities.

Technically, Willemstad as a whole – contrary to popular belief – is not a UNESCO World Hertiage site. However, certain districts within Willemstad are.

According to the UNESCO, “The modern town, the capital of the island nation of Curaçao, consists of several distinct historic districts, reflecting different eras of colonial town planning and development. Punda, the oldest part of the city, was built in the 17th century on the eastern side of Sint Anna Bay, adjacent to Fort Amsterdam and is the only part of the city that had a defence system consisting of walls and ramparts. The other three historic urban districts (Pietermaai, Otrobanda and Scharloo) date from the 18th century. Water Fort and Rif Fort, also included in the inscribed property, were built in the late 1820s as part of a more extensive series of fortifications. In the midst of the historic area is a natural deep-water harbour. The entire property encompasses 86 ha and is surrounded by a 87 ha buffer zone.”

Punda, the beating Heart of Willemstad

The Queen Emma Bridge, also known as the “swinging old lady”, is one of the oldest pontoon bridges around, that literally bridges the gap between Punda and Otrabanda. Seeing it during the day is one thing, but when it lights up at night, it is comes to life!

On the Punda side, we recommend that enjoy a relaxing beverage along the waterfront at the Iguana Cafe to watch the “swinging old lady” open and close to allow ships to enter Willemstad’s massive inland harbor. These ships get impressively close and it is always a miracle to see how they manoeuvre in and out.

Alternatively, you may like to enter Fort Amsterdam, the large yellow historic building south of Iguana Cafe which is the site of the Governor’s Palace and the 1769 Dutch Reformed Church. For dinner, we suggest a visit to the Restaurant De Gouveneur on the Otrobanda side, or go to one of the many restaurants in the Pietermaai District.

Travelers Tip: Discover Punda Vibes’ every Thursday night. the mission of Punda Vibes’ is to make you fall in love with our dushi Punda.

Discover the “SOHO” of Curaçao

An area frequently missed by tourists is the Pietermaai area which is also referred to as the “SOHO” of Curacao. Many of the run-down buildings have been totally restored over the last decade and turned into colorful apartments, boutique hotels, restaurants, and trendy bars.

Mundo Bizarro is a not just a fabulous restaurant with Cuban decor but it is also an eclectic bar with daily happy hours from 5:30 to 6:30pm with live music every Saturday. Other restaurants in the Pietermaai district include 27 Curacao, the oceanfront restaurant of Bijblauw, Dive City (City Beach) and the gourmet favorite of KOME.  For more information on the Top 10 Restaurants of Curacao, click here.

There is a depth to our Dutch Caribbean island that you really do need to feel for yourself.

As we have mentioned many times before and regardless of where you choose to stay, the decision should not be to dive either East or West, the decision should be to discover all of Curaçao (warning: many attempts may be necessary) to truly uncover the magic that lies below the waterline.

Special thanks to our Partners for all the amazing photography and videography: NaturePicsFilms, Gail Johnson Photogaphy and Rutger Geerling. 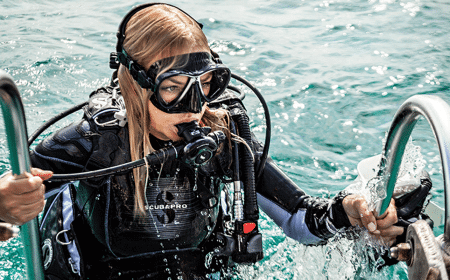 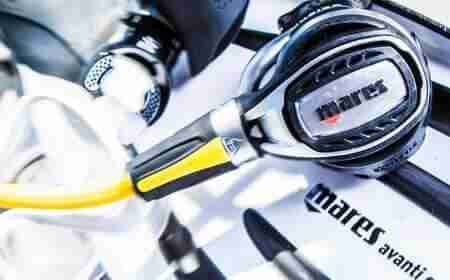 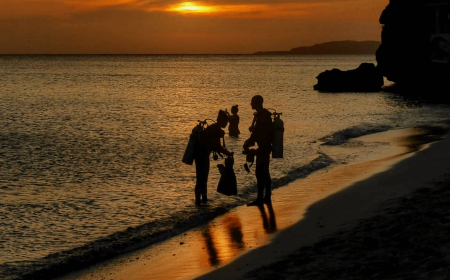